Linking to the WWU. To find out more click HERE.

This weekend we all packed into the vehicle and took in the recycling to a neighboring town. We had 3 large containers of it (and recycle as much if not more than we send to the landfill each week.) After that we took the kids into McDonald’s to spend their arch cards that they got from the ‘Happy Birthday Jesus’ celebration at church from a couple of weeks ago. Burgers and fries and toys, oh my! The girls used their cards (sliding through the slider was a big deal to ‘pay’) and after their ahem discontent with being given ‘girls toys’ the oldest went up with daddy to ask for ‘boy toys’ which included a spy watch and spy scope. 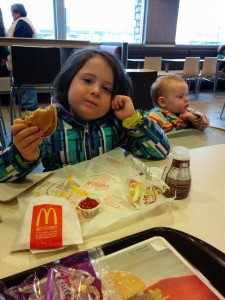 I ate my apples first! Dad got my fries! But the double kids burger was all mine!

Much better than the fairy princess things in their estimation. At least this time. We rely on take out in spurts, mostly during times heavy with doctor’s appointments or other activities that make us short on time, but this was the first time we’d had something like that in a while. Usually if we’re doing anything it’s pizza or mexican food (supporting a local restaurant.) It was a whim thing, but both kids chose fruit as their side dish, and I’m thankful that they make such good decisions. 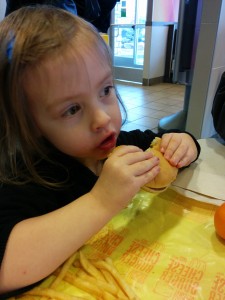 They both really packed in the food, probably because it’s a ‘treat’ paid for by someone else and they knew it, combined with the fact that over the weekend the weather was balmy for our area and they were able to play outside or in the garage even though it was chilly (bundled up)… they still burned a lot of calories with their play! The baby had already eaten, but I gave her an applesauce pouch at the end to keep her entertained. 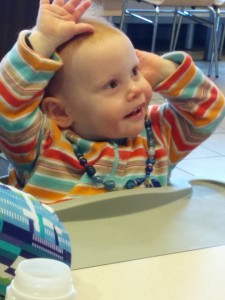 Hi-ing to all the folks.

-She traced letters and worked on P and I letter sheets (education.com) and then counted from 1-20. Later she used her snack to count to 20, placing the snack into rows of 5, and saying how many more she needed to finish out her rows to reach 20. She worked on a coloring page with BRAND NEW! crayons. She is used to using toddler crayons and the new regular size crayons made her hands hurt, so she stopped part of the way through. We discussed body parts and pointed to them on self and worksheet.

-Coloring page, 2 math pages that allowed recognition of even or odd numbers, and a language arts page that involved writing in key terms from FN’s life to create a short biography. She also counted by 2’s start at 1 and 2 in order to figure out even and odd concepts. These were from Florence Nightingale movie/workbook set “Animated Hero Classics.” She counted out a snack by 2’s. She also labeled a human body parts page with simple body parts (education.com.)

K and I took turns reading ‘A Doctor’s Busy Day’ by Nicole Boyd. We looked at pictures of nurses training in ‘American Women and WWII’ by Doris Weatherford in the chapter on ‘Nightingales.’ We discussed terms a doctor uses like ‘on call’ and the importance of washing hands in between patients. Introduced the topic of temperature and fever and how germs are spread in hospitals if doctors and patients aren’t careful. Discussed the importance of clean drinking water.

I set up ‘Brainzy’ accounts for each kid, and started them on the pre-school level of game. Some of the items were too dextrous for the 3 year old to do, and of course she was supervised the whole time. I let the 6 year old read the stories and complete the activities for a set time and then set it aside for another time. The math skills were basically counting and recognizing numbers for the pre-K set, but something my oldest did while in Kindergarten first semester, so not too bad. I will be excited to see what else it has in store. This site is related to education.com and I won the subscription for a year from geekmom blog (I use the education.com worksheets a lot because they are bright and colorful and ended up purchasing a discounted PLUS membership for unloaded downloads.)

– She traced her shapes and named them (1+1+1 from the Doc McStuffins pack), and traced her capital alphabet letters. We also used the P and I letter sheets from education.com, which allows for recognizing and circling lower case letters, writing both upper and lower, and guessing words via pictures that start with that letter.  She worked on an independent coloring page, trying out ‘skinny’ crayons for dexterity. Still working on counting. She skips 15 every.single.time and then gets messed up from there. I know, she’s only 3, so we’re working on it!

-She started a coloring page, and then moved onto 2 math pages, one that involved learning what a multiple was and recognizing multiples of 5 and writing a phrase decoded from the page, and the second involved matching answers to simple addition and subtraction (probably difficult for many her age, but easy enough for her)– by drawing lines, and then again decoding the letters in order to solve for a phrase involving Florence Nightingale, describing the reason she didn’t immediately start a school for nurses (war) and the sacrifices she made in order to progress the field of nursing and the state of hospitals to what they are today. Her language/history page included a key for writing down/recognizing different countries flags and where important events in FN’s life took place. She counted by 5’s to figure out multiples of 5. All worksheets were from the Florence Nightingale movie/workbook set “Animated Hero Classics.”

K and I took turns reading the ‘Heroes for All Times’ Fact tracker from the Magic Tree House series involving Florence Nightingale. It included biographical information and a bit about doctors without borders. The fact tracker was quite in depth about the spread of diseases and this reinforced our discussions about having to have clean conditions in hospitals and where you live. We discussed sanitizing of bandages, (diapers and clothes in our house, and how I sanitize screens, remotes, door handles, etc. when everyone is sick), and how modern hospitals use disposable options like band-aids and gauze to avoid the spread of infection.

I read books that started with the letter P or had P characters in them: 3 little pigs, Poky little Puppy, 2 crazy pigs, Pete’s a Pizza, etc.

Art time: Made a card for a friend who is having surgery.

Language Arts: Wrote down key words about FN, used a rhyming dictionary (with help) to find rhymes of the keywords, and then wrote sentences to form a poem. 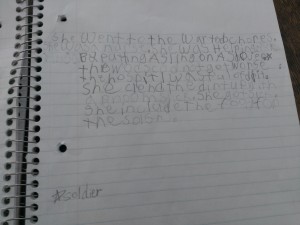 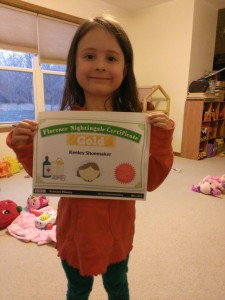 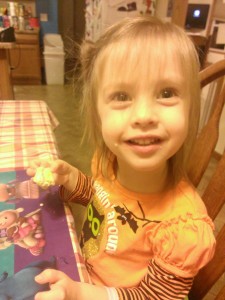 This is where she broke down and demanded to know why I was so mean and not allowing her back to ‘regular’ school. I suggested her dad talk to her after I told her it wasn’t all on me (so far he had refused to talk to her about it, although he said he was for homeschooling given all the issues we had)… no idea what he said, but I basically just asked her to clean her room after that, because 4 months in school from dawn until dusk had left it a nightmare. I told her she should be bothering all the teachers and politicians as to why public school couldn’t accommodate a smart kid. She didn’t think much of that. This is not exactly a high given it’s only the second week.

Art time: Made a card for a friend who is having surgery

Language: Used education.com P and I pages for phonics

Science: Used a rolling pin and flour as a ‘germ experiment’ to discuss how germs can transfer from a common item like a doorknob to their faces through touching, coughing, sneezing, etc. and then looked at the flour on their hands and faces in the mirror, washed up and discussed using soap and scrubbing and singing a song for 20 seconds to fully remove germs.

It’s been frigid this week, but both kids run, jump and play so much in the house (no they’re not supposed to), that they burn off plenty of energy. We’ll make up for it when the windchills aren’t below zero!

Like what you see? Get notified of new posts!

What are you looking for?…